Vedic Period (Vedic Age or The Aryans): Many historians have given various theories regarding the original place of the Aryans. However, the Central Asian theory, given by Max Muller, is the most accepted one. It states that the Aryans were semi-nomadic pastoral people and originated from area around the Caspian Sea in Central Asia.

The Aryans entered India probably through the Khyber Pass (in Hindukush Mountains) around 1500 BC. The holy book of Iran ‘Zend Avesta‘ indicates entry of Aryans to India via Iran.

The early Aryans settled in Eastern Afghanistan, modern Pakistan, Punjab and parts of western UP. The whole region in which the Aryans first settled in India is called the Land of Seven Rivers or ‘Sapta Sindhava‘ (The Indus and its five tributaries and the Saraswati). 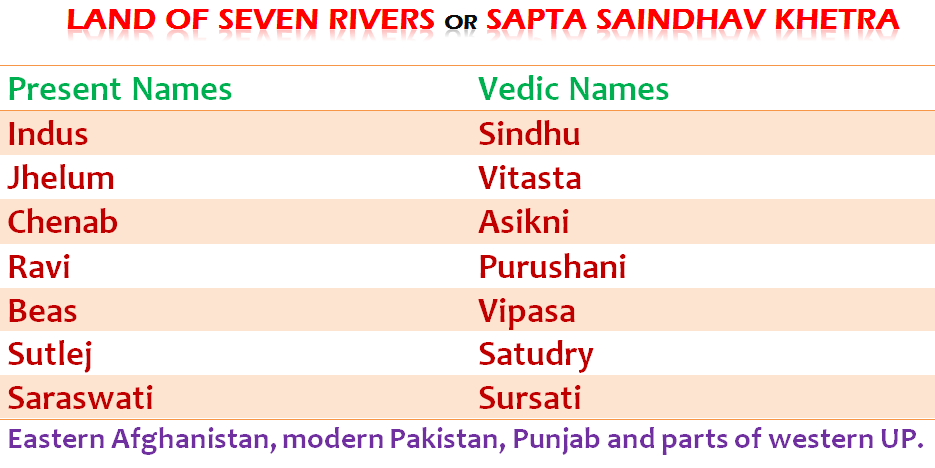 Monarchial form, tribe was known as Jan and its king as Rajan. He was the leader in battle and protector of tribe. His office was not hereditary and was selected among the clan’s men. The Rajan was not an absolute monarch, for the government of the tribe was in part the responsibility of the tribal councils like sabha, samiti, gana and vidhata. Even women attended sabha and vidhata.

Many clans (Vish) formed a tribe. The basic social unit was the Kula or the family and Kulapa was the head of the family.

The king was assisted by a number of officers of which Purohita was the most important. Next important functionary was the Senani (leader of the army), although there was no regular or standing army. The military technique of the early Aryans was much advanced. The Aryans succeeded everywhere because they possessed chariots driven by horses.

There was no regular revenue system and the kingdom was maintained by the voluntary tribute (Bali) of his subjects and the booty won in battle.

Villages were headed by Gramini who used to represent village in sabha and samiti. Later, Gramini was handed Over the charge of Vrajapati also (an officer who enjoyed authority over the pasture ground). 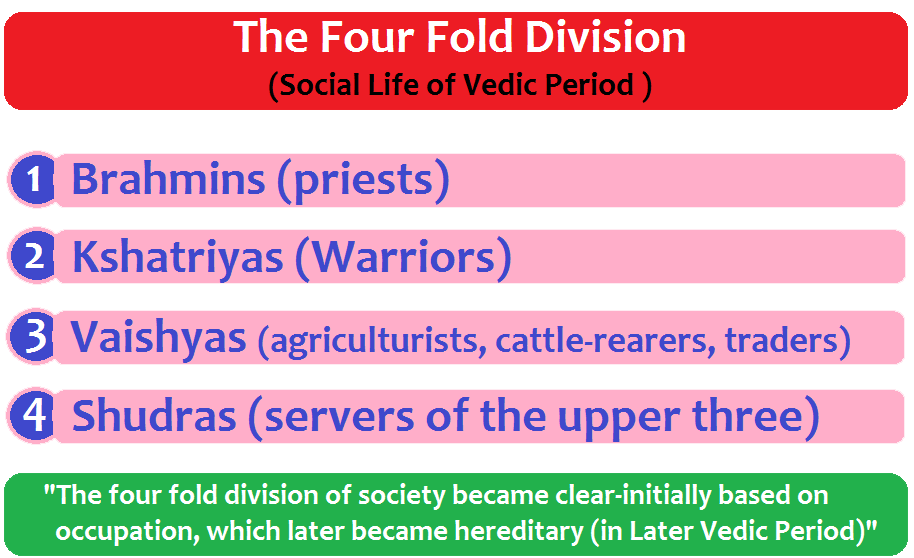 When the Aryans entered India there was already a class division in their tribal structure. As they settled among the dark aboriginals, the Aryans seem to have laid greater stress than before on purity of blood, and class divisions hardened, to exclude those dasas who had found a place in the Aryan society, and those Aryans who had intermarried with the dasas and adopted their ways. Gradually, the tribal society got divided into three groups –warriors, priests and commoners. Later, the fourth dasas or shudra – was also added.

The term varna was used for color, the Aryans being fair, the dasas dark.

Family was the basic unit of society. The family was patriarchal in nature. But women enjoyed equal power with men. Marriage was usually monogamous and indissoluble, but there are few instances of polyandry, levirate and widow-marriage. There are no examples of child-marriage. The marriageable age seems to have been 16 to 17.

The word Arya came to refer to any person who was respected. Aryans were fond of soma, sura, food and dresses. Soma was drunk at sacrifices and its use was sanctified by religion. Sura was purely secular and more potent, and was disapproved by the priestly poets.

The Aryans loved music, and played the flute, lute and harp. There are references to singing and dancing, and to dancing girls. People also delighted in gambling. They enjoyed chariot racing. Both men and women wore ornaments. 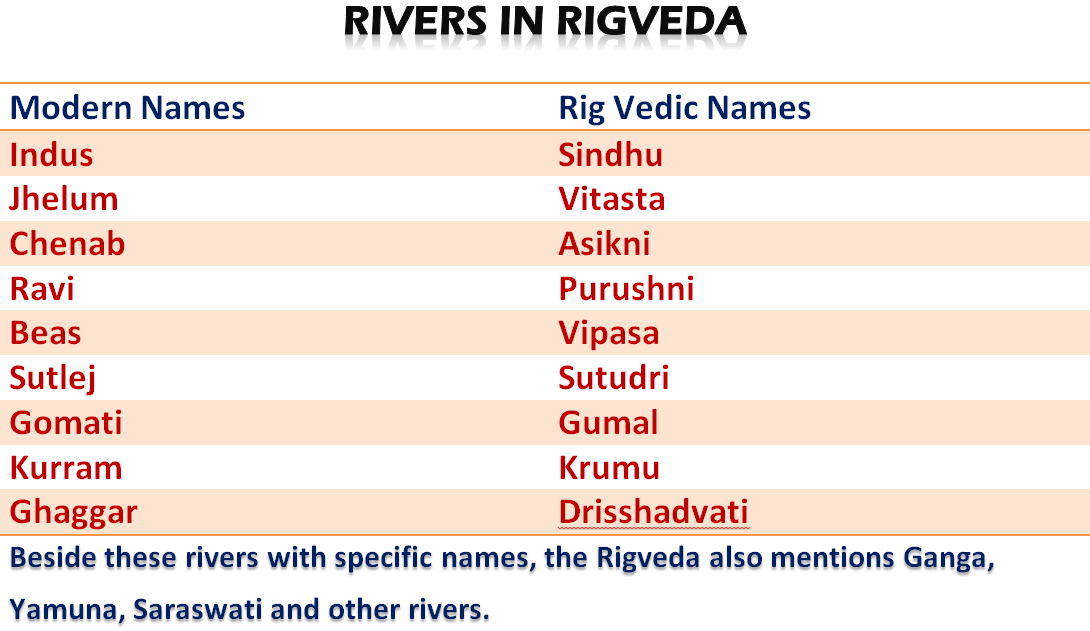 Their bronze smiths were highly skilled, and produced tools and weapons much superior to those of Harappan culture. There were artisans like carpenters, weavers, cobblers, potters, etc..

Aryans followed a mixed economy-pastoral and agricultural-in which cattle played a predominant part.

Most of their wars were fought for cow (most important form of wealth). Cattle were in fact a sort of currency, and values were reckoned in heads of cattle (man’s life was equivalent to that of 100 cows), but they were not held sacred at this time. The horse was almost as important as the cow.

Standard unit of exchange was cow. At the same time coins were also there (gold coins like Nishka, Krishnal and Satmana).

Some female deities are also mentioned, like Aditi and Usha, who represented the appearance of dawn.

In the beginning, they cleared the land by burning; later with the use of iron tools which became common by 1000-800 BC.

Tiny tribal settlements were replaced by strong kingdoms. Powers of the king, who was called Samrat increased. Importance of assemblies declined. Women were no longer permitted to attend assemblies. The term ‘rashtra‘ indicating territory first appeared in this period. A regular army was maintained for the protection of kingdom.

Red ware was most popular with them, and has been found almost all over western UP. However, the most distinctive pottery of the period is known as Painted Grey Ware, which comprised bowls and dishes, used either for rituals or for eating by the upper classes.

Rituals and formulae became prominent in the cult of sacrifice. Indra and Agni lost their importance. Prajapati (the creator) became supreme. Vishnu came to be conceived as the preserver and protector of the people.

Some of the social orders came to have their own deities, e.g., Pushan, responsible for well being of the cattle, became the god of the shudras.

Towards the end of the period, began a strong reaction against sacrificial cults and rituals with the composition of the Upanishads, which valued right belief and knowledge more than anything else. 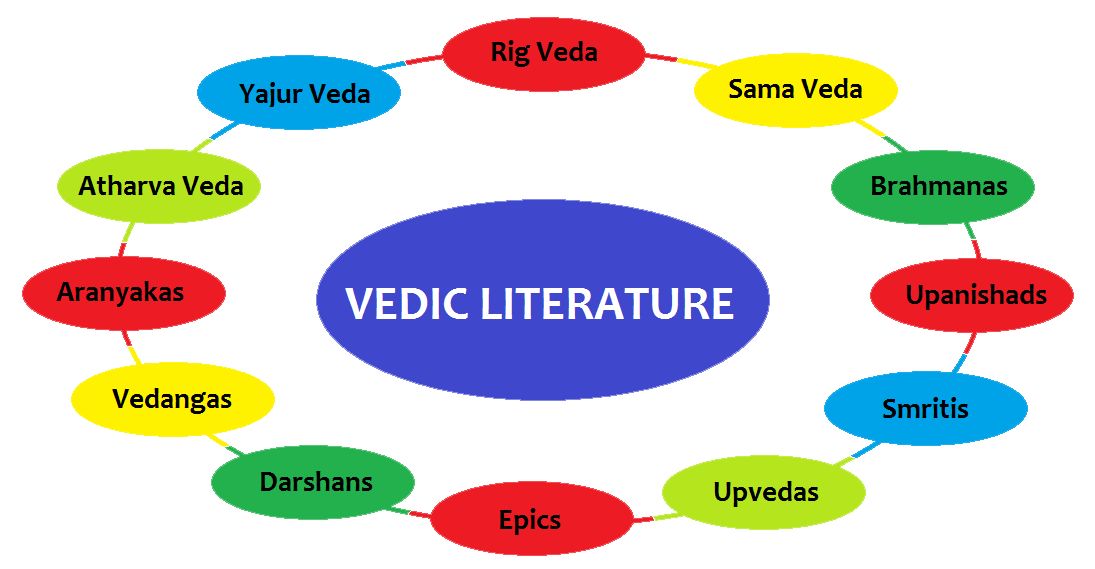 The word ‘Veda‘ comes from the root ‘vidi‘, signifying knowledge. Vedas are also known as Shruti (to hear) as they were passed from generation to generation through verbal transmission.

They are four in all – Rig Veda, Sama Veda, Yajur Veda and Atharva Veda. The first three Vedas are collectively known as ‘Trayi‘ or ‘trio‘. Each Veda is further divided into Samhitas.

They explain the hymns of the vedas in an orthodox manner. Each veda has several Brahmanas attached to it.

The most important is ‘Shatapatha Brahmana‘ attached to Yajurveda, which is most exhaustive and important of all. It recommends ‘One hundred Sacred Paths’.

There are 6 schools of Indian philosophy known as Shad-Darshana. These are given by 6 philosophers of Ancient India:

Though the two epics – the Mahabharata and the Ramayana- were compiled later, they reflect the state of affairs of the Later Vedic Period.

The Indus Valley Civilization was an ancient civilization thriving along the Indus River and the Ghaggar-Hakra River in what is now Pakistan and north-western India. Among other names for this...Read more !

PRE-HISTORY Pre-History: The fossils of the early human being have not been found in India. A hint of the earliest human presence in India is indicated by stone tools of...Read more !