The Indus Valley Civilization was an ancient civilization thriving along the Indus River and the Ghaggar-Hakra River in what is now Pakistan and north-western India. Among other names for this civilization is the Harappan Civilization, in reference to its first excavated city of Harappa. 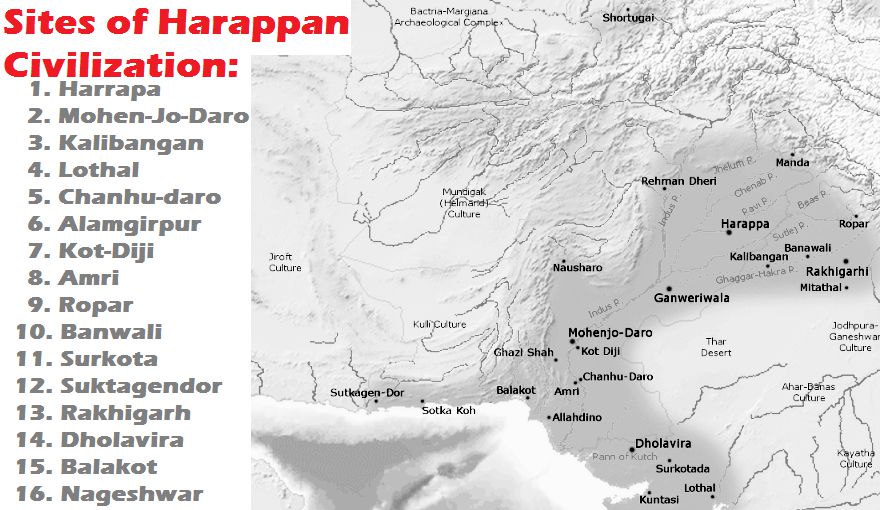 Covered parts of Punjab, Sindh, Baluchistan, Gujarat, Rajasthan and some parts of Western UP. It extended from Manda in Jammu in the north to Daimabad in the south and from Alamgirpur in W. UP to Sutkagendor in Baluchistan in the west.

Largest and the latest site in India is Dholavira in Gujarat. Dr. J.RJoshi and Dr. R.S. Bisht were involved in it.

Elaborate town-planning. It followed the Grid System. Roads were well cut, dividing the town into large rectangular or square blocks. Lamp posts at intervals indicate the existence of street lightning. Fanking the streets, lanes and by-lanes were well-planned houses.

The towns were divided into 2 parts:

The Citadel was an oblong artificial platform some 30-50 feet high and about 400-200 yards in area. It was enclosed by a thick (13 m at Harappa) crenelated mud-brick wall. In Citadel public buildings, granaries, important workshops and religious buildings were there. In lower part people used to live.

In Mohanjodaro, a big public bath (Great Bath) measuring 12 m by 7 m and 2.4 m deep, has been found. Steps led from either end to the surface, with changing rooms alongside. It was probably used for ritual bathing. 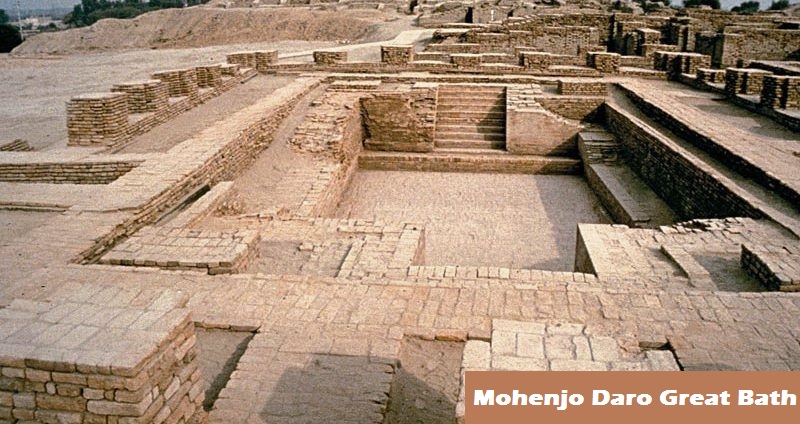 Well-knit external and internal trade. There was no metallic money in circulation and trade was carried through Barter System.

Every merchant or mercantile family probably had a seal bearing an emblem, often of a religious character, and a name or brief description, on one side. The standard Harappa seal was a square or oblong plaque made of steatite stone. The primary purpose of the seal was probably to mark the ownership of property, but they may have also served as amulets.

The Mesopotamian records from about 2350 BC onwards refer to trade relations with Meluha, the ancient name of the Indus region. Harappan seals and other material has been found at Mesopotamia. Also traded with Sumer. 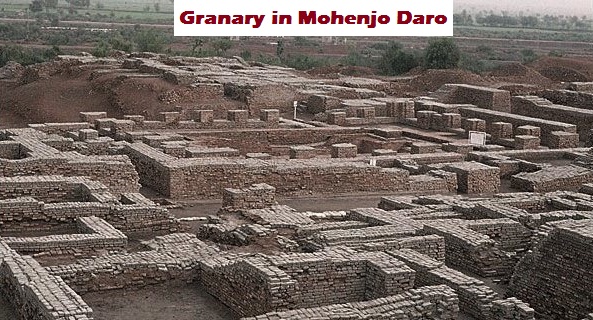 Bronze was made by mixing tin and copper. Tools were mostly made of copper and Bronze. For making bronze, copper was obtained from Khetri in Rajasthan and from Baluchistan, and tin from Afghanistan.

The Harappans’ most notable artistic achievement was their seal gravings, esp. those of animals. The red sandstone torso of a man is particularly impressive for its realism. However, the most impressive of the figurines is perhaps the bronze image of the famous dancing girl (identified as Devadasi), found at Mohenjodaro. 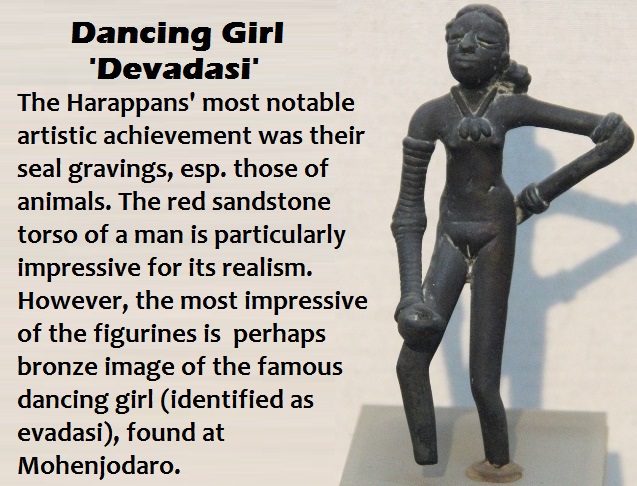 For their children, they made cattle-toys with movable heads, model monkeys which could slide down a string, little toy-carts, and whistles shaped like birds, all of terracotta.

Main object of worship was the Mother Goddess. But the upper classes preferred a god, nude with two horns, much similar to Pasupati Siva. Represented on the seal is a figure with three horned heads in a yogic posture. He is surrounded by an elephant, a tiger and a rhinoceros, and below his throne is a buffalo. Near his feet are two deer. Pashupatinath represented male deity.

Many trees (pipal), animals (bull), birds (dove, pigeon) and stones were worshipped. Unicorn as also worshipped. However, no temple has been found, though idolatry was practiced.

Although no definite proof is available with regard to the disposal of the dead, a broad view is that probably there were three methods of disposing the dead – complete burial, burial after exposure of the body to birds and beasts, and cremation followed by burial of the ashes. The discovery of cinerary urns and jars, goblets or vessels with ashes, bones and charcoal may, however, suggest that during the flourishing period of the Indus Valley culture the third method was generally practiced. In Harappa, there is one place where evidence of coffin burial is there. The people probably believed in ghosts and evil spirits, as amulets were worn. 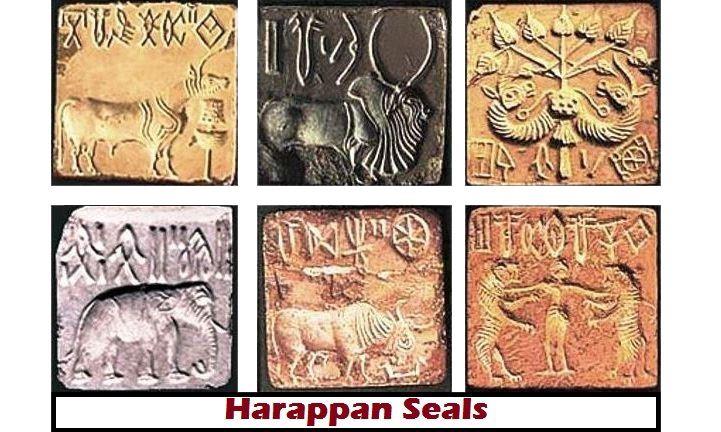 The script has not been deciphered so far, but overlaps of letters show that it was written from right to left in the first line and left to right in the second line. This style is called ‘Boustrophedon‘.

There is no clear idea of the political organization of the Indus Valley people. Perhaps they were more concerned with commerce and they were possibly ruled by a class of merchants.

Also, there was an organization like a municipal corporation to look after the civic amenities of the people.

Excavations at the site have led to following specific findings:

Some of the specific findings during the excavations of Mohenjodaro include:

Kalibangan was an important Harappan city. The word ‘Kalibangan’ means ‘black bangles’. A ploughed field was the most important discovery of the early excavations. Later excavations at Kalibangan made the following specific discoveries.

Lothal was an important trade centre of the Harappan culture. the town planning in Lothal was different from that of Harappa and Mohenjo-daro. The city was divided into six sections. Each section was built on a wide platform of unripe bricks. Each platform was separated by a road with width ranging from 12 feet to 20 feet. Excavations at Lothal led to some specific discoveries which include:

Excavations at Chanhu-daro have revealed three different cultural layers from lowest to the top being Indus culture, the Jhukar culture and the Jhangar culture. The site is specially important for providing evidences about different Harappan factories. These factories produced seals, toys and bone implements. It was the only Harappan city without a citadel.

Some remarkable findings at Chanhu-daro include bronze figures of bullock cart and ekkas; a small pot suggesting an kinkwell, footprints of an elephant and a dog chasing a cat.

Alamgipur is considered the eastern boundary of the Indus culture. Although the wares found here resemble those at other Harappan sites, other findings suggest that Alamgirpur developed during late-Harappan culture. The site is remarkable tor providing the impression of cloth on a trough.

Amri also gives evidences of a pre-Harappan settlement. However, it lacks the fortification plan of the pre-Harappan phase. A spectacular feature of Amri is that it gives the impression of existence of transitional culture between pre and post-harappan culture.

Important findings at Amri include the actual remains of rhinceros; traces of Jhangar culture in late or declining Harappan phase and fire altars.

Ropar is a Harappan site from where remains of pre-Harappan and Harappan cultures have been found. Buildings at Ropar were made mainly of stone and soil.

There is also an evidence of burying a dog below the human burial (Though the practice was prevalent in Burzhom in Kashmir, it was rare in the Harappan context).

Situated in Hissar district of Haryana, Banwali has provided two phases of culture during its excavations; the pre-Harappan (Phase D and the Harappan (Phase I). Though phase II belonged to the Harappan period, chess-board or grid pattern of town planning was not always followed as in other Harappan sites. The roads were neither always straight, nor did they cut at right angles.

It also lacked another remarkable feature of the Harappan civilization- a systematic drainage system. A high quality barley has been found in excavations. Other important material remains include ceramics, steatite seal and a few terracotta sealings with typical Indus script.

Situated in Kutch (Bhuj) district of Gujarat and excavated by J.P Joshi in 1972, Surkotada was an important fortified Harappan settlement. The site is important particularly because it has provided the first actual remains of horse bones. A cemetery with four pot burials with some human bones has also been found. A grave has been found in association with a big rock, a rare finding of the Harappan culture.

Suktagendor, situated in Sindh (Pakistan), was an important coastal town of the Indus civilization. Excavations of Suktagendor have revealed a two-fold division of the township: the Citadel and the Lower City. It is said that Suktagendor was originally a port which later cut off from the sea due to coastal uplift.

The Harappan culture lasted for around 1,000 years. Invasion of the Aryans, recurrent floods, social breakup of Harappans, Earthquakes, etc are listed as possible causes.

PRE-HISTORY Pre-History: The fossils of the early human being have not been found in India. A hint of the earliest human presence in India is indicated by stone tools of...Read more !