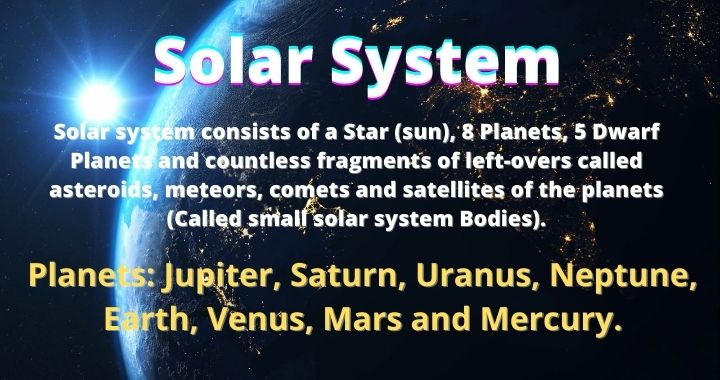 Various theories have been given by different persons to explain the origin of Solar System.

THE SUN: THE STAR OF OUR SOLAR SYSTEM

It is one of the stars in the milky way galaxy. It takes 224 million years to complete one circle revolution) around the galactic circle (called cosmic year) The sun is 109 times bigger than the earth and weighs 2 x 1027 tons.

The core of the sun has the temperature about 15 million degrees K.

Superimposed on suns white light are hundreds of dark lines called Fraunhoferines. Each line indicates some element present in the solar atmosphere.

The Sun is constantly emitting streams of its substance (mainly hydrogen) as protons in all directions. Sometimes these emissions are massive. Such emissions are called Prominence.

Sometimes these emissions roll out of the atmosphere of the sun for thousands and thousands of miles, when they are seen as Solar Flares.

Persistent stream or protons and electrons is blowing out of the corona and sweeping over the whole Solar system. This stream is called Solar Wind.

The earth s magnetosphere acts as a shield against the ever-blowing solar wind and deflects it away from the earth. Nevertheless, particles of solar wind sometimes pierce the magnetic shield and enter the upper atmosphere, where, like the solar flares, they cause aurora displays. In the Arctic region, they are called Aurora Borealis and in the Antarctic region, they are known as Aurora Australis.

The surface of the sun changes continuously. Bright spots called Plages and dark spots called Sunspots Occur there. sunspots appear dark because they are cooler, i.e., they have a temperature of about 1500°c. Sunspots have a periodicity of 11 years.

The energy of sun comes from the fusion of hydrogen into helium. Sunlight takes 8 min, 16.6 sec to reach earth.

Ecliptic is an imaginary annual path of Sun across the sky.

REDEFINITION OF A PLANET

The 2006 redefinition of “planet” by the International Astronomical Union (IAU) states at, in the solar system, a planet is a celestial body that:

According to the definition, there are currently eight planets and five dwarf planets known in the solar system. The 5 dwarf planets are Pluto, Ceres, Eris, Makemake and Haumea.

Rotates on its axis in exactly the same time as it takes to complete one revolution. That is why we see only one side of the moon (only 59% of its surface).

To our unaided vision, moon seems to be made-up of bright and dark patches. The bright parts are the mountains and highlands, while the darker patches are low-lying planes.

The highest mountains on moon are Liebnitz Mountains, which are 10,660 m high. They are situated at moon’s South Pole.

Neil Armstrong and Buzz Aldrin reached moon on July 20, 1969 on Apollo XI and set the foot on July 21, 1969 (landing spot is called Sea of tranquility).

SOME FACTS ABOUT MOON

Asteroids are a series of very small planets or fragments of planets lying between the orbits of Mars and Jupiter. Also called Planeloads or small planets’.

Asteroids are presumed to be the remnants of matter that did not clump during the formation of the solar system. Even if the materials did collide, the gravity from Jupiter pulled them apart from each other.

Composed of rock, dust and metal, the early asteroids were formed when the heavy metal within them sunk to the center of the rock, forming a metal core. Over time, the lighter rocks formed layers around the core. The rock would then cool steadily, eventually becoming a solid.

Currently, the largest object in the asteroid belt, Ceres, at about 950 km diameter, has been placed under Dwarf Planet category.

It has a head and a tail. Its tail originates only when it gets closer to the sun. The tail can be 20-30 million km long. It always point away from the sun because of the force exerted by solar wind and radiation on the cometory material.

Comets may originate in a huge cloud called the oort cloud that is thought to surround the Solar System.

The meteors are probably the remains of comets which are scattered in the inter-planetary space of the Solar System. On contact with the earth’s atmosphere, they burn due to friction.

Sometimes an unusually large number of meteors can be seen in rapid succession. Such a display is called a meteor shower and occurs when the earth passes through a swarm of meteoroids.

Largest known is of 70 tons, which landed in Namibia in pre-historic times.

PLANETS: AT A GLANCE

Cosmology – Some Important Facts of Cosmology

The Universe or the Cosmos, as perceived today, consists of millions of Galaxies. A galaxy is a huge congregation of stars held together by the forces of gravity. In the...Read more !