Home » Essay » Role of Judiciary in a Democracy – Essay 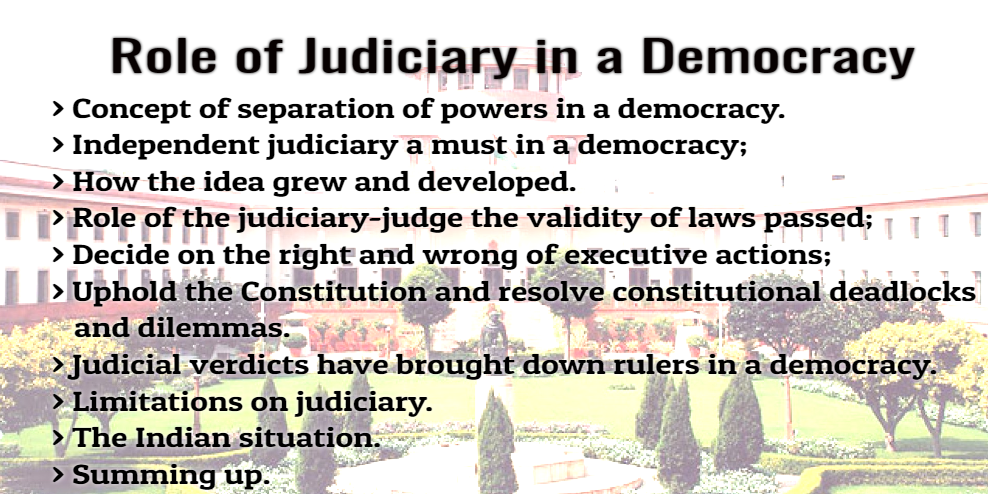 Separation of powers in a democracy

The theory of the separation of powers, implicit in the writings of Aristotle but first given independent expression by Harrington and Locke, is known in its modern form largely through the writings of Montesquieu.

Following Montesquieu, the three powers normally considered to be separable in the exercise of government are the legislature, the executive, and the judiciary.

The first formulates policy and enacts it as law, the second carries out policy in action, and the third applies the law according to rules of procedural justice and resolves disputes.

The sign of the despot is to subsume these powers under one. In particular, the despot will never permit an independent judiciary, which might impede him from having his way in every dispute. In despotism nothing in the structure of power acts as a brake upon power, and hence no freedom, the hallmark of democracy, can be guaranteed.

In order to limit power, the three constituents of the state must be separated as much as possible, and balanced against each other. This principle was carried into reality in the US Constitution, the first fully democratic constitution of the modern world.

Independent judiciary a must in a democracy

Without an independent judiciary, the system may be termed ‘democratic centralism‘ which is practically equivalent to despotism or dictatorship. In any healthy democratic state, the independence of the judiciary is sought to be maintained through certain norms in appointing judges along-with a complicated procedure for removing them from office. Furthermore, their salaries and allowances are not changeable at the whim of the executive or the legislature.

But above all, a free judiciary can only exist in a political system in which democratic principles are truly believed in and acted upon by all alike -executive, legislature and the citizenry at large. Reciprocally, the judiciary in a democracy should have the courage to protect its independence and deliver impartial judgement free of the fear of repercussions on career and prospects.

How the idea grew and developed

Role of the judiciary-judge the validity of laws passed

In a democracy, there are institutional arrangements by which courts can decide upon the constitutional validity of the laws passed by the legislature or the actions taken by the administrative and the executive authorities.

Judicial review is essentially an American institution and is based on the simple logic that the constitution is supreme and confers, limited powers on he executive and the legislature and, if they overstep their limits, the judiciary must restrain them.

One of the important persons instrumental in building the American state was Chief Justice John Marshal. He strengthened and consolidated the unity and democracy of the United States through a series of judicial decisions. In a bid to rescue his country from the ill-effects of the Great Depression, the then President of the US, F.D. Roosevelt (1932-36) initiated his New Deal programme.

Many feared that democracy in the US was in peril. But the situation was saved, as two-thirds of the New Deal was invalidated by the Supreme Court.

It was only as democratic principles began to disseminate in the nineteenth century, and as democratic governments began to be set up in the twentieth century (especially after the Second World War), that the role of the judiciary came to be increasingly emphasized in the consolidation and perpetuation of the democratic institutions and democratic norms.

Decide on the right and wrong of executive actions

Human passion for freedom is great, but freedom has often been limited by the ruling authorities throughout history. “Men are born free, yet everywhere they are in chains” said Rousseau.

However, there comes a stage when even the bare minimum of freedom needed by an individual is sought to be snatched by those in power, because this power is concentrated in the hands of a single individual or a small group of people. In such circumstances, people’s agony and bitterness become manifest.

One such climactic situation was reached in the 1930s, when people were being crushed under the heavy hands of totalitarian governments in different parts of the world. The experiences of history convinced the people that the democratic way was the only form of decision-making to preserve man’s natural liberty and to serve his interests.

However, as selfishness, greed and passion for power are inherent in human nature, it was feared that even a democratic leader may turn authoritarian and act arbitrarily at times. Therefore, sufficient checks and balances were provided.

As legislature and executive are generally dominated by the same political party, sometimes they may enact and act without any regard to the people’s will and interests. In that situation, the judiciary remains the only institution to which individuals may appeal for help. And the judiciary is then expected to study any such executive enactment or action to find out whether it is anti-people or not. Once the verdict goes against such an enactment or action, the executive and legislature are expected to retrace their steps if the democratic norms have to survive.

Uphold the Constitution and resolve constitutional deadlocks and dilemmas

Also, there are instances when a constitutional deadlock or dilemma renders the government helpless and when different interpretations are possible of a constitutional provision. The judiciary here steps in as the expert and the authority on the constitution to defuse the crisis.

Lastly, as democracy leaves sufficient scope for different opinions and beliefs, sometimes there may surface two major and almost equally forceful opinions contradicting and conflicting with each other, holding out little chance of compromise. If the government adopts either of the opinions, it can be called partisan. The judiciary being regarded, and respected, as independent and impartial, its verdict is generally accepted by all the parties, and the crisis is resolved.

Judicial verdicts have brought down rulers in a democracy

Several instances can be cited of the leaders having been dethroned or having had to abdicate because of judicial verdicts. In Japan, Mr Nakasone and others had to resign when they were found guilty by the court.

In Bangladesh, the ex-president Mr Ershad was thrown in prison because of judicial pronouncements. The judiciary also takes over the reins of power, though rarely. in case of a political vacuum or crisis as in Pakistan after the resignation of both the president (Ishaq Khan) and the prime minister (Nawaz Sharif). In India, too, the judiciary has many landmark judgement to its credit.

For example, the election of Mrs Indira Gandhi was declared void in 1975 by the Allahabad High Court, after which she ill-advisedly imposed national emergency.

Nevertheless, the role of the judiciary is generally limited because of the balance of power tilting towards legislation in most of the democratic systems and also because of the legislature, or sometimes the executive head of the State, having power to make appointments to the judiciary.

The debate on this issue has been going on for a long time and till now there has been no unanimity on the least defective procedure in such appointments.

There are problems that adversely affect judicial independence in India. The politics of super-session, transfer, demotion, extension of term on monthly basis as ad-hoc judges, non-confirmation of the High Court judges, among other things, are disturbing trends in a democracy.

There are also examples where the judges have been threatened publicly by ministers and legislators.

Again, whenever the judiciary declares any law passed by the legislature as constitutionally invalid, there has been a hue and cry in the Parliament. The court verdicts are often nullified by constitutional amendment.

All these odds before the Indian judiciary not with standing, it has served to stabilize, consolidate and protect Indian democracy by giving many important verdicts.

A typical verdict was in the Keshavanand Bharati case because in this case the Supreme Court held that the Constitution has a certain basic structure which cannot be amended.

This concept of basic structure’ limited the amending power of the Parliament. Again, in the Minerva Mills case, by striking down clauses 4 and 5 of Article 368, the Constitution Bench of the Supreme Court has rightly restored the doctrine of Judicial Review which the 42nd Constitution Amendment Act, 1976, had very substantially curtailed. More recently we have had striking verdicts on the anti-defection acts.

In general the judiciary is in a sense weaker than Parliament, which claims to be the representative of the people, the real sovereign in a democracy. However, it plays an important role in the survival and strengthening of the people’s resolve to rule themselves and to protect their interests and liberty. It is true that the judiciary has to depend on the executive for the implementation of its decisions but it does not mean that the executive or even those sitting in the legislature can ignore such decisions.

After all, in a democracy the members of the legislature and the executive have to go periodically to the people (at the hustings) who have high respect for the judiciary in spite of occasional aberrations. And as Justice Venkatachalliah opined, unless we have respect in the judiciary, democracy cannot survive.

The Role of Opposition in a Democracy – Essay

POINTS TO DEVELOP Place of  ‘opposition in various forms of government and origin of the concept. Opposition and the party system. Functions of opposition in a democracy form alternative government;...Read more !

POINTS TO DEVELOP Democracy by its very nature incorporates a variety of opinions and, by implication, accommodat dissent. Minority views must be considered even if decision is by majority in...Read more !