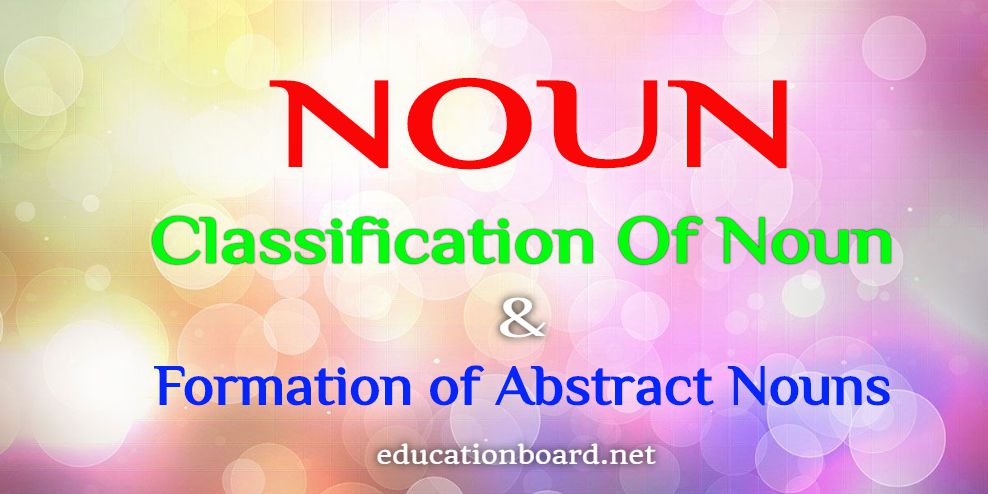 A Noun is a word used as the name of a person, place or thing. or Naming words are called Noun.

Noun is classified into five groups. They are :

Look at the sentences :

Vikramaditya was a great king.

The Noun Vikramaditya refers to a particular king. but the Noun king might be used with any other king. We call Vikramaditya a Proper Noun and king a Common Noun.

Gauri is a girl.

Here, Gauri is a Proper Noun, while girl is a Common Noun.

Ramesh is a boy.

Here, Ramesh is a Proper Noun, while boy is a Common Noun.

Delhi is a city.

Here, Delhi is a Proper Noun, while city is a Common Noun.

Canada is a country.

Here, Canada is a Proper Noun, while country is a Common Noun.

A Common Noun is a name given in common to every person or thing of the same class or kind.

Proper Nouns are always written with a capital letter at the beginning.

Sachin is the Bradman of India.

Kalidas is often called the Shakespeare (the greatest dramatist) of India.

A Collective Noun is the name of a number (or collection) of persons or things taken together and spoken of as one whole.

Thus, when a name denotes a group of similar individuals, considered as one undivided whole, it is called a Collective Noun.

An Abstract Noun is usually the name of a quality action or state considered apart from the object to which it belongs.

(We can speak of a brave soldier, a strong man, a beautiful flower. But we can also think of these qualities apart from any particular person or thing, and speak of bravery, strength, beauty by themselves. So, we can also speak of what persons do or feel apart from the persons themselves, and give it a name. The word abstract means drawn off.)

1. A Material Noun is the name of a material or a substance or an ingredient of an alloy.

Compound Nouns are made up of two or more words.

The teacher wrote the exam notes on the blackboard.

The robber was caught by the police-man.

In the above sentences blackboard and policeman are made of fwo nouns ‘black + board’ and ‘police + man’.

Look at the following compound nouns:

Abstract Nouns are generally formed from Common Nouns, Verbs and Adjectives by adding such suffixes as: