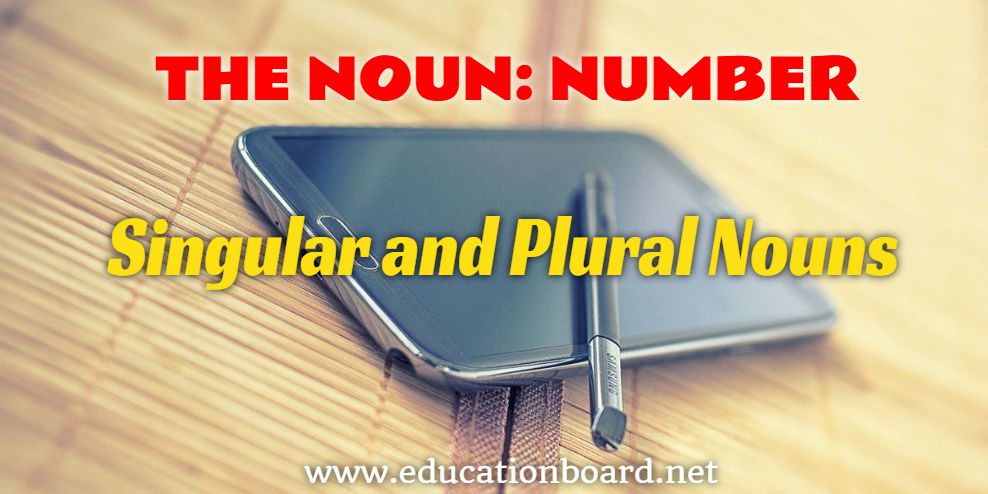 A noun that denotes one person or thing is said to be in the Singular Number.

A noun that denotes more than one person or thing is said to be in the Plural Number.

How Plural is formed

Generally, the Plurals of nouns are formed by adding ‘s’ to the singular form.

There are some rules of changing singular nouns into plural ones.

There are some exceptions where only ‘s’ is needed for a plural one in ‘o’ ending nouns.

If ‘y’ is the last letter of a noun and that ‘y’ is preceded by a consonant, then change ‘y’ into ‘ies’ for the plural forms.

If ‘y’ is the last letter of a noun and that ‘y’ is preceded by a vowels, then put only ‘s’ to the end of that noun for plural.

Yet, there are some exceptions to this rule, such as:

It is found that a few nouns form their plural by changing the inside vowel of the singular form.

There are a few nouns that form their plural by adding ‘en’ to the singular.

There are some nouns which have their singular and plural forms a-like.

2. The boy gave me five hundred, rupees. (When used after numerals)

3. The car cost me eighty thoudand, rupees. (When used after numerals)

There are some nouns which are only used in the plural.

(a) Names of instruments which have two parts forming a kind of pair. For example:

(b) Names of certain articles of dress. For example:

(c) Names of diseases. For example:

(d) Names of games. For example:

(e) Certain other nouns. For example:

There are some plural forms of nouns which are actually singular. For example:

If plural looking subjects are particularised or possessed, they become as plural nouns:

2. The politics of our state are dirty. (politics – particularised, plural number)

3. The summons was issued by the magistrate. (summons – singular number)

The following nouns are always used in singular number. For example:

Certain Collective Nouns, though singular in form, are always used as plurals. For example:

In Compound Nouns, we make their plural forms only by adding ‘s’ to the main word.

Now, look at these examples :

Nouns borrowed from other languages in English have their special rules to change them into plural.

Noun + Proposition + the same noun remain always singular in use.

The digits, verbs, pronouns and abbreviations take their plural form in the following ways:

Some nouns have two meanings in the singular but only one in plural.

Some nouns have two forms for the plural each with a somewhat different meaning.

Some nouns have one meaning in the singular and more than one in the plural.

Some nouns change their meaning when we make them plural.

(a) Abstract Nouns have no plural. For example:

When such words do appear in his plural form, they are used as common nouns. For example:

(b) There are also some names of substances or materials which are never used in plurals. They are called Material Nouns. For example:

But, when these words are used in the plural, they become Common nouns and also, their meanings are changed. For example: