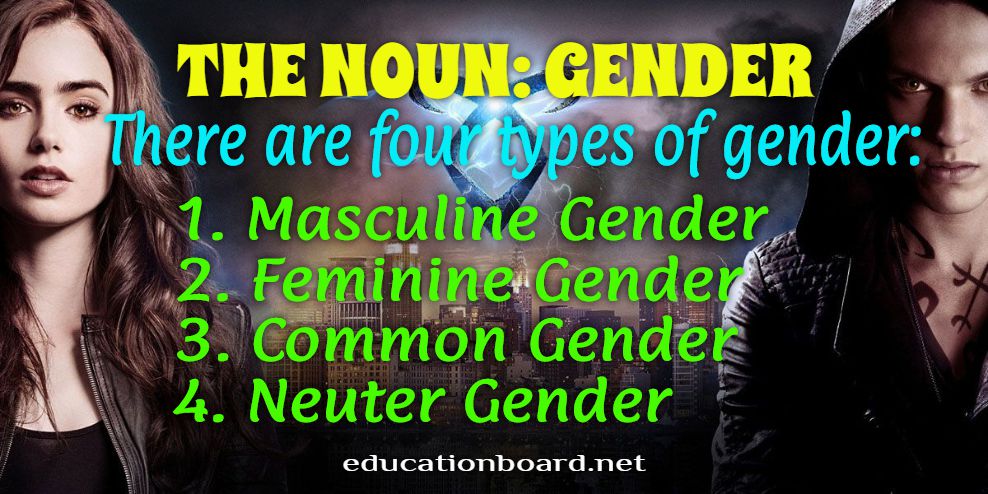 In grammar there is a classifications of a Noun or Pronoun as Masculine or Feminine. Therefore, gender is the sexual classification in grammar. Gender comes from Latin genus, meaning kind or sort.

We know that living beings are either the male or the female sex.

A noun that denotes a male animal is said to be of the Masculine Gender.

A noun that denotes a female animal is said to be of the Feminine Gender.

Besides, Masculine Gender and Feminine Gender, there is a gender which is said to be the Common Gender. In this gender, a noun that denotes either a male or a female is included.

FORMATION OF FEMININE NOUNS FROM THE MASCULINE

There are three ways of forming the feminine from the masculine.

1. By using a diferent word:

3. By substituting a feminine word for a masculine in compound words:

Again, “ess” is added after dropping the vowel of the masculine ending.

1. Some Masculine Nouns are used in the Common Gender

2. Some Feminine Nouns are used in the Common Gender

3. Some Feminine Nouns have no corresponding Masculine forms

4. Some Masculines have no corresponding Feminines