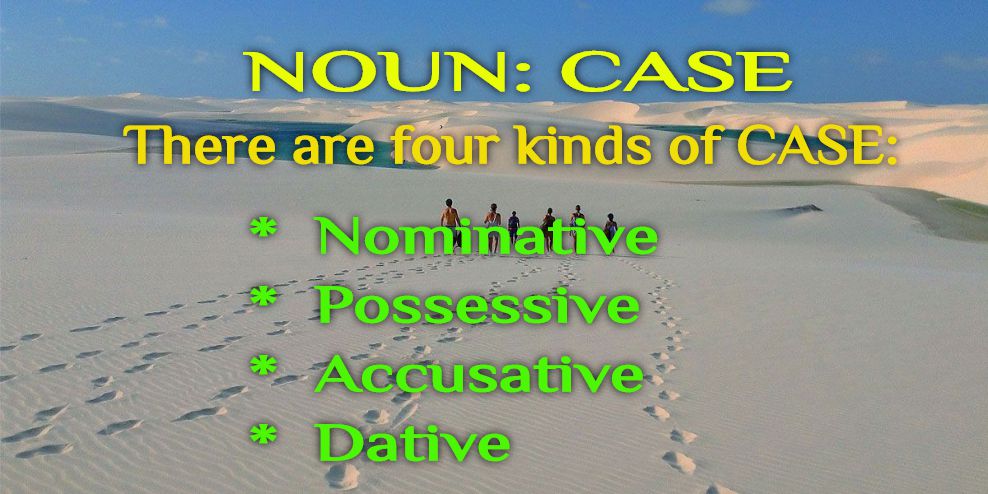 There are four kinds of CASE: Nominative, Possessive, Accusative, Dative.

If Noun or Pronoun is used as the subject, it is called Nominative case.

1. She is reading. (Nominative)

If the possession or the relation ol noun is expressed, it is called Possessive Case.

If noun or pronoun is used as the object, it is called Accusative case.

2. That is Anjali. (Accusative)

If Noun or pronoun is called or addressed, it is called Dative case.

But, before reading Noun and Case, we should study the case of Pronoun.

The case of Pronoun

1. After ‘let‘ pronouns are used in Accusative Case.

Let them, her and we go there. –wrong

Let them, her and us go there. –correct

2. After preposition pronoun is used in Accusative Case.

There is a nice relation between she and I. –wrong

There is a nice relation between her and me. –Correct

3. After ‘than‘ pronoun should be used in Nominative case.

Ram is better than her. –Wrong

Ram is better than she. –correct

As helping verb is not used in comparative degree.

4. After ‘if‘, pronoun is used in Nominative Case.

If I were him I would have gone. –wrong

If I were he I would have gone. –correct

Use of the Possessive Case

1. To the end of a singular Noun we put (‘s), apostrophe for Possessive Case.

3. In compound nouns, we use possessive with the last term.

4. lf possessive is used before ‘than‘, it should be used after ‘than‘.

5. If possessive is used before ‘as‘ it should also be used after ‘as‘.

Doly’s sister is as beautiful as Sony. –wrong

Dolly’s sister is as beautiful as Sony’s. –correct

6. If two Nouns are closely related, we are to use possessive with the last Noun.

These two nouns are not closely related.

8. Possessive is also used with some personified phrases.

9. The Possessive can also be used to show ‘time, distance, weight, edge‘ etc.

In a year’s time.

Kamia went to barber’s. (the shop of barber)

Kavita went to doctor’s. (the cliníc of doctor)

To-night l dine at my uncle’s. (house of uncle)

At his wit’s end.

At his finger’s end.