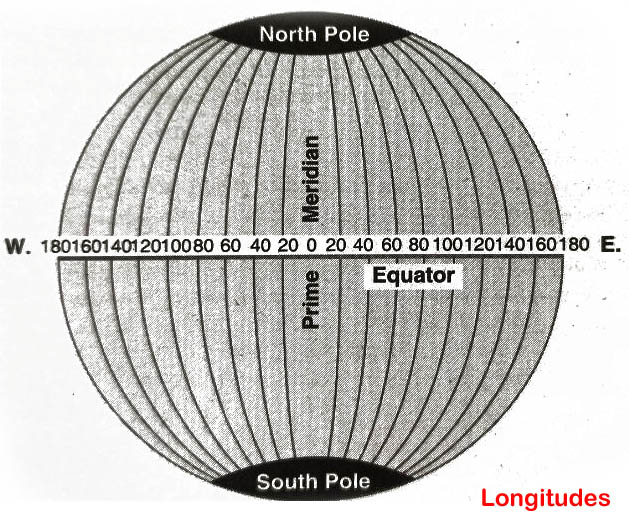 Longitudes: It is the angular distance measured from the centre of the earth. On the globe the lines of longitude are drawn as a series of semicircles that extend from the North Pole to the South Pole through the equator. They are also called meridians.

There are 360 meridians of longitude. The prime meridian is a longitude of 00, passing through the Royal Observatory at Greenwich near London. This meridian is taken by geographers to divide the earth into the eastern and the western hemispheres.

Each meridian of longitude is a semi-circle. 180° meridian (international Date Line) lies exactly opposite to 0° meridian. Such points are called ANTIPODAL POINTS.

The earth is divided into 24 longitudinal zones, each being 15 or 1 hour apart in time (4 minutes = 1 degree). 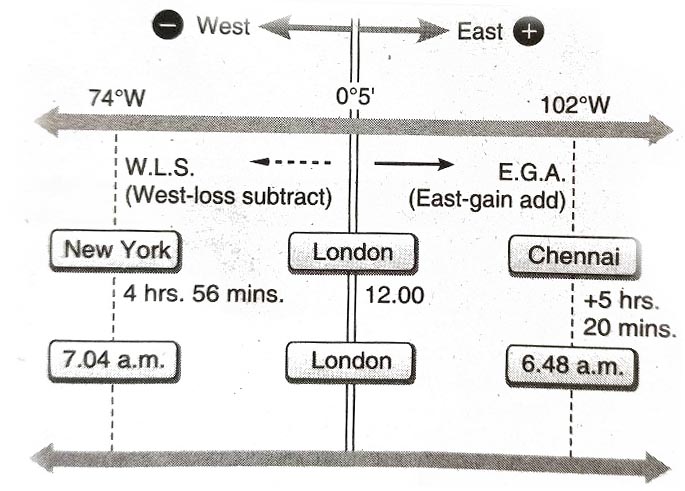 Places that are on the same meridian have the same local (sun) time. Since the earth makes one complete revolution of 360° in 24 hours, it passes through 15 in one hour or 1° in 4 minutes.

To avoid confusion about having many local times within one country, a particular meridian is chosen for the whole country whose time is known as ‘standard time’.

Generally, the standard meridians are chosen to differ from the Greenwich meridian by the multiples of fifteen degree or seven and a half degree, i.e., by exact number of hours or half hours.

The world is thus divided into a number of time zones. Larger countries like Russia, Canada, USA etc., have greater east-west extension, so they adopt several time zones. Russia has 11 time zones while USA and Canada have 5 time zones.

India, whose longitudinal extent is approx. 30°, has adopted only one time zone, selecting the 82.5°E for the standard time which is 5 hours and 30 minutes ahead of GMT (Greenwich Mean Time).

Earth is a planet in the solar system. Earth has 2 types of movements: Rotation or daily movement. Revolution or annual movement. 1. ROTATION Spins on its imaginary axis from west to...Read more !