Latitude: Imaginary lines drawn parallel to the equator. Measured as an angle whose apex is at the center of the earth. The equator represents 0° latitude, while the North Pole is 90°N and the South Pole 90°S.

Latitude is an angle which ranges from 0° at the Equator to 90° (North or South) at the poles. Lines of constant latitude, or parallels, run east–west as circles parallel to the equator.

There are total 181 latitudes including the equator. Each parallel of latitude is a circle, but they are not equal. The circle becomes smaller towards the poles. Equator is the Greatest Circle’ that can be drawn on the earth‘s surface.

The distance between any two parallels of latitude is always equal. 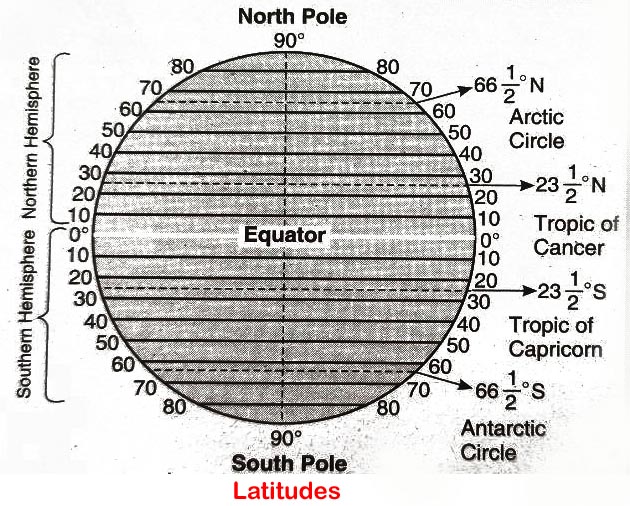 The plane of the Earth’s orbit about the Sun is called the ecliptic, and the plane perpendicular to the rotation axis of the Earth is the equatorial plane. The angle between the ecliptic and the equatorial plane is called variously the axial tilt, the obliquity, or the inclination of the ecliptic, and it is conventionally denoted by i. The latitude of the tropical circles is equal to i and the latitude of the polar circles is its complement. The axis of rotation varies slowly over time and the values given here are those for the current epoch. The time variation is discussed more fully in the article on axial tilt.

Earth’s Movements Earth is a planet in the solar system. Earth has 2 types of movements: Rotation or daily movement. Revolution or annual movement. 1. ROTATION Spins on its imaginary axis from...Read more !