Home » Science » Human Diseases – Types, their cause and prevention: Science

Any person who Is free from illnesses and possesses good mental status is said to be healthy. A healthy person is always active and cheerful. It is truly said that a healthy mind resides in a healthy body.

Human Diseases: The term ‘disease‘ means ‘not ease‘. In other words, we can say ‘the state or being uncomfortable. We feel uncomfortable when we suffer from diseases. Thus, a disease is an abnormal condition in which the body is not able to carry out all its functions properly. Fever, pain, cough, headache, loose motion, etc. are some common diseases. Our body gives some symptoms or indications when we are sick.

But there may be different ca uses for a particular disease. Hence, diseases are classified into two groups:

Some deficiency diseases are discussed below:

Some other causes of non-communicable diseases:

Some diseases spread from one person to another by very tiny organisms called microbes or germs. Microbes can only be seen under the microscope. When the microbes of a particular disease attack a healthy person, he/she suffers from the disease. The infected person may infect another healthy person and in this way, the disease spreads.

Thus, a disease which spreads from an infected person to a healthy person is known as a communicable disease.

Let us learn about different types of microbes, the diseases they spread and the modes of spreading of the diseases.

Bacteria cause diseases like tuberculosis and whooping cough. Modes of spreading of these diseases are sneezing, coughing  and sharing the things used by infected person. These are airborne diseases.

Viruses cause diseases like common cold, measles and chicken pox. When a healthy person comes in comes in contact with the sneezing, coughing and clothing of an infected person, he/she too gets infected with the disease. These are airborne diseases. 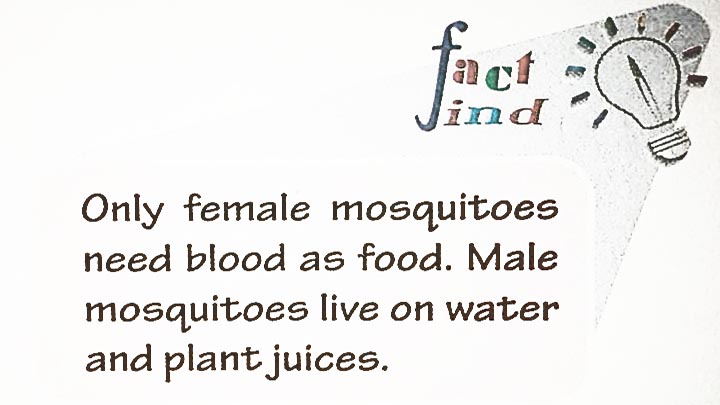 Similarly, protozoa of malaria and dengue spread through the bites of mosquitoes When a mosquito, carrying malaria-causing protozoa, bites a healthy person, it injects these protozoa into his/her blood and causes malaria. Diseases that are caused by the bites of infected vectors such as mosquitoes and flies are called vector-borne diseases.

By a protozoan, Plasmodium. There are several species of Plasmodium ith different periods of incubation:

Life cycle of Plasmodium is completed in 2 hosts:

After incubation period, temperature of body rises with a feeling of chill, signs of headache and nausea. Then temperature falls (symptom: sweating). The above symptoms are repeated after every fixed hrs. depending upon the species.

The spread of infectious diseases can be controlled by :

Disease at a Glance

Today, In this list/table, we are going to share with you the incredible facts about the human body. For example, did you know that children can only see in black...Read more !

Balance Diet – What is Balance Diet, Nutrients and its components: Science

Balanced Diet: All of us need food to grow and remain healthy. There are many useful substances present in food items. These substances are called nutrients. A nutrient is a...Read more !