The economy of India is known as the developing market economy. It is the fifth largest economy in the world by nominal GDP and the third largest by purchasing power parity (PPP). According to the IMF, India is ranked 142nd per capita by GDP (nominal) and GDP (PPP) in 2018, based on per capita income. After the 1991 economic liberalization, free market oriented reforms pushed India to achieve 6% to 7%. % Annual average GDP growth. From 2014 to 2019, India’s economy was the fastest growing major economy in the world, overtaking China.

The long-term growth perspective of the Indian economy remains positive due to its young population and its low dependency ratio, healthy savings and investment rates and increasing integration in the global economy. Despite previous reforms, economic growth is still significantly slowed by bureaucracy, poor infrastructure, policy uncertainty, agricultural mismanagement, inflexible labor laws, and complex land acquisition processes. The economy slowed due to the shock of “demonetizaton” in 2017 and the introduction of the Goods and Services Tax in 2017. About 60% of India’s GDP is driven by domestic private consumption and remains the world’s sixth largest consumer market. Apart from private consumption, India’s GDP is also derived from government spending, investment and exports. In 2018, India was the tenth largest importer and nineteenth largest exporter in the world. India has been a member of the World Trade Organization since 1 January 1995. It ranked 77th in the Ease of Doing Business Index and 58th in the Global Competitiveness Report. With 510 million workers, the Indian labor force is the second largest in the world as of 2018.

India’s largest trading partners are China, USA, United Arab Emirates, Saudi Arabia, Switzerland, Germany, Hong Kong, Indonesia, South Korea and Malaysia. In 2018–19, the Foreign Direct Investment (FDI) services sector in India, with the computer and telecommunications industry at $ 64.4 billion, remains the leading sector for FDI inflows. India has free trade agreements with several countries, including ASEAN, SAFTA, MERCOSUR, South Korea, Japan and some others which are in effect or under negotiation phase. The services sector makes up 55.6% of the GDP and remains the fastest growing sector, while the industrial sector and agriculture sector employ most of the labor force. The Bombay Stock Exchange and the National Stock Exchange are one of the largest stock exchanges in the world by market capitalization. India is the sixth largest manufacturer in the world, representing 3% of global manufacturing output and employing over 57 million people. It has the eighth largest foreign exchange reserves in the world, worth $ 430 billion. India has a high national debt with 70% of GDP, while its fiscal deficit remains at 3.4% of GDP. India’s state-owned banks faced mounting bad loans, resulting in lower loan growth, as well as putting the NBFC sector in a liquidity crisis.

The Indian textile industry is estimated at $ 150 billion and contributes 7% of industrial production and 2% of India’s GDP, while employing over 45 million people directly. The Indian IT industry is a major exporter of IT services with $ 180 billion in revenue and employs over four million people. India’s telecom industry is the world’s second largest by number of mobile phones, smartphones and Internet users. It is the world’s tenth largest oil producer and the third largest oil consumer. The Indian automobile industry is the fourth largest country in the world in terms of production. It has a $ 672 billion retail market that contributes over 10% of India’s GDP and is one of the world’s fastest growing e-commerce markets. India has the fourth largest natural resource in the world, with mining sector contributing 11% of the country’s industrial GDP and 2.5% of the total GDP. It is also the world’s second largest coal producer, second largest steel producer and third largest electricity producer. 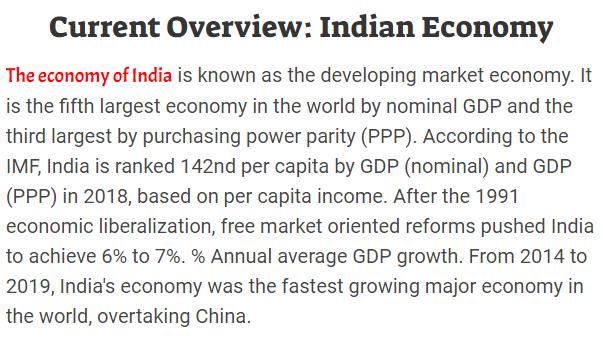 UNEMPLOYMENT What is the meaning of Unemployment? Unemployment simply means a situation when able and willing people are not getting jobs as per their own capabilities. TYPES OF UNEMPLOYMENT 1....Read more !