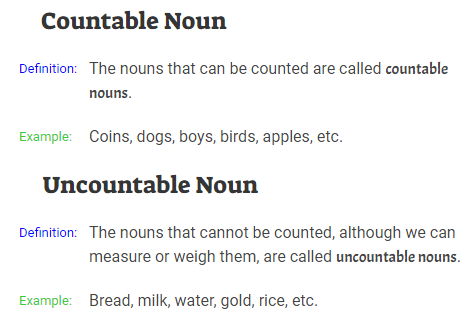 The nouns that can be counted are called countable nouns.

They have a singular and a plural forms. The singular form can use the determiner ‘a’ or ‘an’, If you want to ask about the quantity of a countable noun, you ask How many?, combined with the plural countable noun.

3. I would like two books and one pen, please.

The nouns that cannot be counted, although we can measure or weigh them, are called uncountable nouns.

In general, non-count nouns are considered to refer to indivisible wholes (which are not individual objects and can not be counted). For this reason, they are sometimes called MASS nouns. Uncountable nouns are used to describe a quality, action, thing or substance that can be poured or measured. Non-Count nouns also refer to a whole category made up of different varieties or a whole group of things that is made up of many individual parts. Uncountable nouns are always singular. Use the singular form of the verb with uncountable nouns.

2. That is the tool we use for the work.

1. He did not have much sugar left.

2. There has been a lot of research into the causes of this disease.

3. He gave me a great deal of advice before my interview.

4. Can you give me some information about uncountable nouns?

Some nouns are countable in other languages but uncountable in English. They must follow the rules for uncountable nouns. The most common ones are: accommodation, advice, baggage, behavior, bread, furniture, information, luggage, news, progress, traffic, travel, trouble, weather, work.

1. I didn’t make much progress today.

3. This looks like a lot of trouble to me.

4. How much bread should I bring?

5. We did an hour of work yesterday.

Be careful with the noun hair which is normally uncountable in English, so it is not used in the plural. It can be countable only when referring to individual hairs.

1. The child’s hair was curly.

2. She has long blond hair.

3. My father is getting a few grey hairs now. (refers to individual hairs)

4. I washed my hair yesterday.

5. I found a hair in my soup! (refers to a single strand of hair)

The nouns which can be counted are further classified as: Singular nouns (one) and Plural nouns (two or more).

1. This characteristic of countable nouns is called ‘number of a noun‘.

2. Some nouns, like the word time, beauty, fire, death, gossip can be used as either a count noun, or a non-count noun.