The Universe or the Cosmos, as perceived today, consists of millions of Galaxies. A galaxy is a huge congregation of stars held together by the forces of gravity. 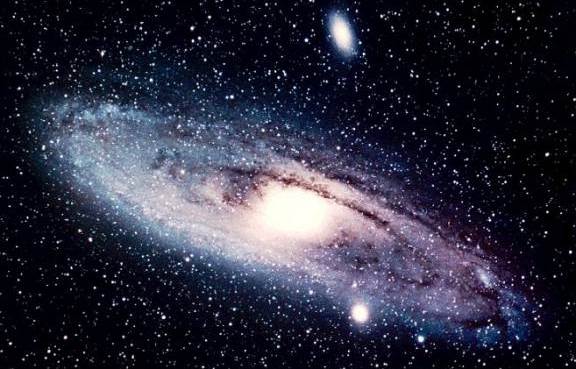 Edwin Hubble in 1924 first demonstrated existence of galaxies beyond Milky Way. He proved that these galaxies are flying away from each other and that the farther they are, the faster they fly. This means that the universe is expanding like a balloon that is being blown up.

Our galaxy is Milky Way Galaxy (or the Akash Ganga). It is spiral in shape. It consists of over a 100 billion stars rotating and revolving about its center. Nearest galaxy to ours is Andromeda.

The Big Bang Theory evaluates that 15 billion years ago, cosmic matter (universe) was in an extremely compressed state, from which expansion started by a primordial explosion. This explosion broke up the super-dense ball and cast its fragments far out into space, where they are still traveling at thousands of miles per second. It is from these speeding fragments of matter that our galaxies have been formed. The formation of galaxies and stars has not halted the speed of expansion. And, as it happens in all explosions, the farthest pieces are flying the fastest.

Later, Pulsating (Oscillating) Universe Theory was given which says that universe periodically expands from the explosion of the primordial body, then contracts back and explodes again, Over immensely long cycles, ad infinitum.

Measurement units of space are:

Light Year: It is the distance covered by light in one year in vacuum at a speed of 3x 10 km/s.

Astronomical Unit(A.U.): It is the mean distance between the earth and the sun. one light year is equal to 60,000 A.U.

Parsec: It represents the distance at which thee mean radius of earth’s orbit subtends an angle of one second of an arc. If is equal to 3.26 light years.

Stars are self-luminous bodies that account for 98 percent of the material in the galaxy. The rest 2 percent consists of interstellar or galactic gas and dust in an attenuated form.

Stars are formed by gravitational contractions from these vast clouds of galactic Gas and dust. Star forming clouds are thousands of times denser than the normal interstellar gas. Star forming matter is richer in hydrogen and helium.

A star’s colour indicates the temperature of its surface. Blue colour denotes maximum temperature. Then comes yellow, then red, etc.

The life of a star is spread over billions of years. It begins to form by compression of galactic gas and dust. Compression generates heat which in turn causes hydrogen to be converted into helium in nuclear fusion, thereby emitting large amount of heat and light.

Continued nuclear fusion over a period of time starts depletion of hydrogen and the helium core becomes increasingly heavy, resulting into swelling and reddening of outer regions. Such stars of gigantic dimensions are termed as Red Giants.

If the star is of sun’s size, it becomes a White Dwarf. Their central density can reach up to 10 grams per cubic cm.

If the star is bigger than the sun but not more than twice as big, it will turn into a Neutron Star or Pulsar. Their central density is 100000000000000 grams per cubic cm. They are formed due to Novae or Super novae explosion.

Stars having mass greater than three times that of the sun, because of their great gravitational power, have contracted so much that they have developed super density of 1016 grams per cubic cm. It is so dense that nothing, not even light, can escape from its gravity and hence called ‘Black Hole‘.