Computer: A computer is a man made electronic machine which stores, reads and processes data to produce meaningful information as output. It works very fast and does not make mistakes but its capacity is limited. It is made of English word ‘to compute’. It operates under the control of a set of instructions that is stored in its memory unit. A computer accepts data from an input device and processes it into useful information which it displays on its output device.

Some Topics Related To Computer – Index 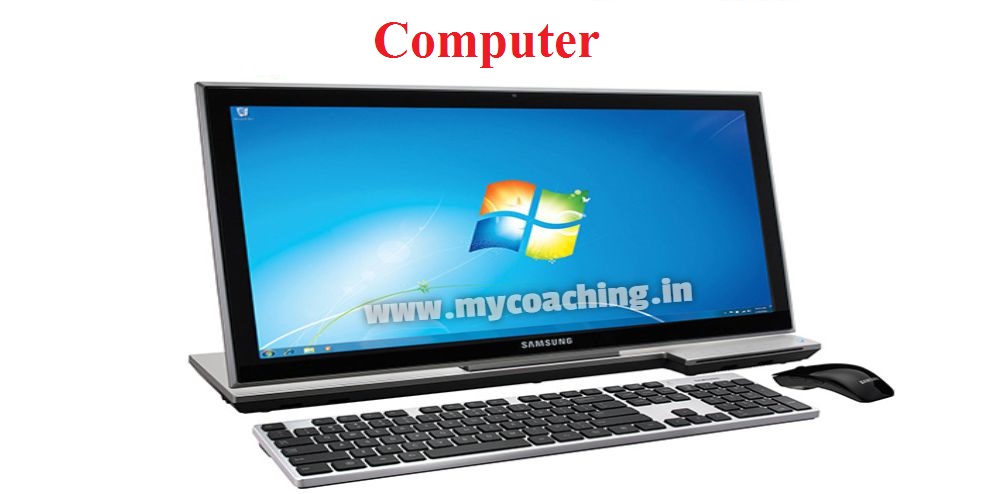 Actually,a computer is a collection of hardware and software components that helps us to accomplish many different tasks. Hardware consists of the Computer itself and includes a CPU, a monitor, a keyboard, a mouse and any equipment Connected to it. Software is the set of instructions that the Computer follows in performing a task.

A calculator is a small electronic device used for doing mathematics calculations. A calculator cannot be used for writing letters or drawing images, while a computer can be used to calculate, draw images, write letters, and do many other things as well.

Human Being and Computers

Computers cannot work on their own. They do what we want them to do, only we give them the right command. Its memory is better than human memory. I It can’t forget anything it has saved, so it is also called an artificial intelligence.

Comparison between Human beings and Computers

Data: Data is information required by the computer to be able to operate or to putithe other way information we put into the con is called data. It is gathered from any source but cannot be organized. It cannot be used for decision making. It is a collection of unprocessed items specific purpose. Generally it is divided into three types: numeric data, alphabetic data and alphanumeric data.

Information : Information is well organized data which we get after processing of data and it helps in decision making. It is processed data that is organized, meaningful, and useful.

Characteristics of a computer

Computers are the foundation of business, travel, and leisure of life today. The common characteristics that make computers of all sizes such a powerfull machine are speed, accuracy, reliability, storage capacity, ability to operate automatically, diligence, scientific approach and versatility.

Computers providethe processing speed required by all facets of society The quick service we expect at the bank, at the grocery store, on the stock exchange, and on the Internet are dependent on the speed of computers. The speed of a computer is measured in the following time units for the access time or instructions per second.

Computers are quite accurate and extremely reliable as well. They are only a machine and do not make errors on their own. Errors are caused by humans, not by computers.

Computers are capable of storing enormous amounts of data that must be located and retrieved very quickly. The capability to store and retrieve volumes of data is the core of the information Age.

Once a process has been initiated, it is capable of functioning automatically. It does not require an operator at each stage of the process.

It is capable of operating at exactly the same level of speed and accuracy even if it has to carry out the most voluminous and complex operations for a long period of time. It does not suffer from physical and mental fatigue, lack of concentration and laziness.

The wide use of computers in so many areas such as Commerce, scientific applications, education in day to day life is ample evidence of its versatility.

Basic applications/uses of a computer

Limitations of a computer

Prone to virus: The computer sometimes malfunctions and results in loss of data if some virus attack.

Depends on electricity: One of the limitations also includes machines failure in case of some hardware or software problem. The computer sometimes results in loss of data if power fails.

Functions of a computer

Data collection: Data collection is a process of preparing and collecting data to obtain information to keep on record, make decisions and pass information on to others. Computers collect or gather data, which means that they allow users to input data.

Data storage : Data storage means that it retains digital data used for computing at some interval of time.

Data output: It is a processed data which we get as an output.

In the past, manual techniques used for collecting, manipulating and distributing data to achieve certain objectives, were known as Data Processing. As technology advances, computers are used to achieve results accomplished by humans and machines. Example: calculator, typewriter and computer. This is known as electronic Data Processing (E.D.P).

The major objective of data processing is to get the desired information from any raw data. Data refers to raw facts that are gathered from any source but are not organized. That data cannot be used to make decisions. Information, thus, refers to processed data which is well organized or presented in a meaningful fashion and increase the understanding of the data. This helps in decision making. Processing involves transforming input into output.

A group of equipments put together to process a data is called a computer system. A computer system consists of several components to achieve electronic data prod processing.

They are devices which accept data from user and transmit it to the central processing unit as electronic pulses. For example ,the ATM (Automatic teller Machine) system, when we want to withdraw, where required to enter our Personal identification number (PIN).When we enter our PIN, we are using an input device, the keypad.

It is an abbreviation for central processing unit, and is pronounced as separate letters. The Central Processing Unit is the brain of the computer sometimes referred to simply as the central processor, but commonly called a processor. The Central Processing Unit is the unit where most calculations take place. It is linked with the input units and output units to form the computer system. In terms of computing power, the CPU is the most important component of a computer system. On personal computer (PC)and small workstations, the CPUis housed in a single chip called a microprocessor or microchip.

Each computer’s CPU can have different cycles based on different instruction sets, but will be similar to the following cycle-

There are two main components of a CPU

It performs all arithmetic operations and decision making operations.

Itextracts instructions from memory and decodes and executes them, calling on the ALU, when necessary It controls all functions and coordinates all components of computer. It is in-charge of fetch-execution cycle.

More components of a CPU, that are vital to its operation, are the registers which are very small memory locations that are responsible for holding the data that is to be processed.

Devices which accept information from cPU and convert it to human readable form. For example, when we pay the cashier in the supermarket, he will give a receipt. This receipt a form of output from the output device known as printer.